On Sunday, April 17, one day after 2016’s official Record Store Day, record.guide and Wolff’s Flea Market host its 4th Vinyl Spectacular. Twice a year, record collectors gather to hunt, dig, and spin their way through over 75 dealer tables full of vinyl records and other music and memorabilia.


Hours for shoppers are from 8am to 4pm, but if you don’t mind bumping elbows, early-bird hours begin at 7am for a $5 entrance. Otherwise it’s a buck ($1) to have the experience you won’t forget.


Our dealers will include Chicagoland record shops who, along with other collectors, will bring RSD 2016 swag and releases for any who happened to miss out on something the day earlier.


We can still cram in some tables, so call 312-554-5515 or email chris@wolffs.com for further vendor information. We welcome those selling instruments and musical gear to inquire into availability, as well.

Again, dress up as your most favorite star to receive free shopper’s admission and check the day schedule, past photos, and future updates at http://record.guide. 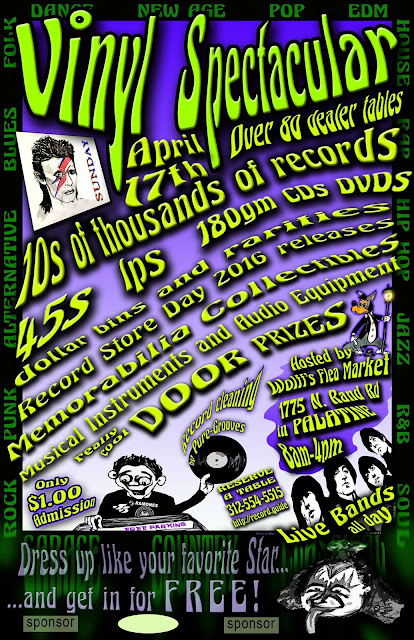