Flea market vendors may find this guide helpful when shopping for merchandise from websites, wholesalers, importers and other sources. While we do not wish to point fingers, the reality is that countless online sites like ebay, alibaba.com and dhgate.com, as well as your locally owned independent store and "a guy you know" provide an unfortunate mixture of legitimate and counterfeit products at "too good to be true" prices.  When obtaining your merchandise, please avoid the counterfeit and trademark infringing items pictured and described below.

These specific iPhone accessories have been chosen for this guide because of their popularity and prevalence online, in independently owned stores, at wholesalers and because of their eventual appearance at the flea market level. As always, realize that we are not legal or trademark experts, nor are we affiliated with Apple.  We are a small business that conducts ongoing counterfeit research via retail stores, wholesalers, news stories, independently owned stores, online manufacturers' websites, expert advice, etc. Trademarks are used for purposes of education and discussion and belong to the individual companies.

You are not allowed to sell counterfeits at Wolff's Flea Market, and will consequently be out hard-earned money, stuck with unsellable stock and possible permanently ejected from our venues.

Remember that there can be a fine line between no-name generic compatible products and trademark infringing/counterfeit items. Problems arise in 2 different manners:
The pictures below depict how inferior, illegal counterfeits are designed to look identical to authentic items. Do not purchase the counterfeits to resell! 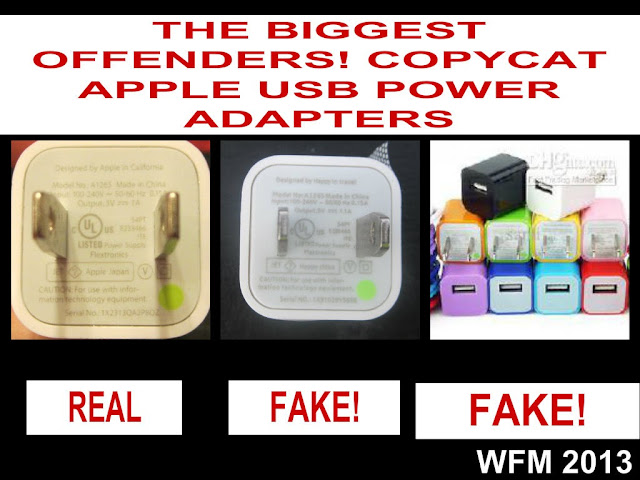 
THE $2 OR LESS FAKES BELOW LOOK ALIKE
AND ARE CONSIDERED COUNTERFEIT BY US!


EXAMPLE #4-PACKAGING
Compare these 2 boxes and you will see that they look almost identical. The box on the left is missing the Apple logo and contains a counterfeit cable. It infringes upon the real packaging design and leads consumers the think they are purchasing the real deal.

EXAMPLE #5-CHINA BAGS
With no offense intended to our overseas friends, the truth of the matter is that 80% of all counterfeit products are imported from China. Many of these items are not packaged in branded boxes, but come in clear, unlabeled bags. When we see allegedly branded items in these bags, we suspect the merchandise as being fake, since no licensing or authentic product information is present.
More on packaging and labeling in another guide.

WORKING TOGETHER TO FIGHT COUNTERFEITING

However, the heavy presence of expensive smart phones and electronics in the global marketplace has caused the parallel appearance of 3 versions of potential problem merchandise:

Sometimes a very fine line distinguishes between these three version and unfortunately, it is up to us to analyze and determine an item's appropriateness for our market. Sometimes we are able to consult with an individual company to glean quick information, but often we do this the long way

Wolff's continually researches the latest products, news and lawsuits and sets parameters for which type of merchandise is allowed or banned. This may change weekly!

Most counterfeits arrive on freight barges from China at ports on the east (New York) or west (California, Washington, Alaska) coasts. If not found and seized by customs at those points in the pipeline, counterfeits eventually work their way into the middle of the country-namely Chicago, which has the third highest presence of counterfeits in the country. We subscribe to Google alerts for many licensed brands in order to predict what items may be coming our way and are hopefully ready with starter information should the item appear at our market.

When I say appear, the item may attempt to trickle in as a single low quality fake. For example, we were ready for the appearance of counterfeit ____ phone cases, and were able to determine which items didn't belong. Those vendors who attempted to sell were quickly evicted.

While we fight counterfeits, our scale is obviously a small dot in the equation. Here are examples of larger scale efforts. Until the sources along the counterfeit pipeline are stopped, fakes will trickle into the country and end up at independently owned stores, mall kiosks, warehouses, ebay, craigslist, pop-up stores, "a guy" and flea markets. I will update this site as more news appears.

Posted by Wolff's Flea Market at 8:32 AM No comments: