Our Bottom Line:
Counterfeits are Illegal and
Banned at our Markets.
Even if they are cheap, used, cute, etc.

Over the years, I have had many discussions about counterfeit purses with both vendors and customers.

"I like the purse because it is cute"
"I would never buy the real thing"
"I can't afford the real thing"
"I don't care if it falls apart in a month"
"It was so cheap"
"It's not hurting anyone"
"I want to wear that brand, but won't buy a real one"
"Everyone knows it's not real, so it's ok"
"It might be real"
"No one will notice that it is fake"
"It looks really good for a fake"
"I know it is real and I got it at a great price"

I can argue each point, but for now will focus on the "Cute Factor".

Over the years I have amassed a large selection of new and used counterfeit items. Many were found at thrift shops (passively sold as fakes). Other sources include vendor gifts (they love to help the anti-counterfeit cause), dumpsters (true story), online sites, area wholesalers.

Most of the fakes I have collected are stupid, ugly and obvious. A few required up to a couple of hours to figure out was was wrong.

It was not until today that I found what I consider to be an potential "Cute Counterfeit". I knew this bag was bad as soon as I spotted it from afar at the thrift shop. Upon closer inspection, it was even more obvious that the details and stitching were horrendous. But the problem was that it was just a little cute. Maybe I will never understand what people feel when they buy a cute counterfeit, but I may have almost felt a tiny stirring if not for the fact that the bag claimed to be Louis Vuitton and I hated it on the spot.

I did buy the bag for my educational Haul of Shame and to keep it "off the streets".

Posted by Wolff's Flea Market at 12:32 PM No comments:

One of the cheapest ways to make a counterfeit purse is to simply take a no-name "blank" purse and add a designer sticker or metal emblem.

So obvious, so fake, so illegal.

Images and links shown for purposes of discussion and education.

People are arrested and imprisoned for this crime!

Below are a couple of examples.  If you see an alleged designer purse boasting an emblem, just pick on the label to see if it is a pull-off sticker or a loosely secured metal emblem.

Or, if you are me, pull the fake tag off and add it to your sick collection.

COMPARISON OF REAL VS. FAKE PACKAGING

When purchasing new name brand items, look for appropriate and proper packaging that indicate that the item is authentic.
Note the differences between authentic retail packaging and improper/counterfeit or blank packaging on the right of each section.

Beware of items that are priced cheaply and come in generic cello or blank packaging. The contents of such packaging is usually counterfeit. 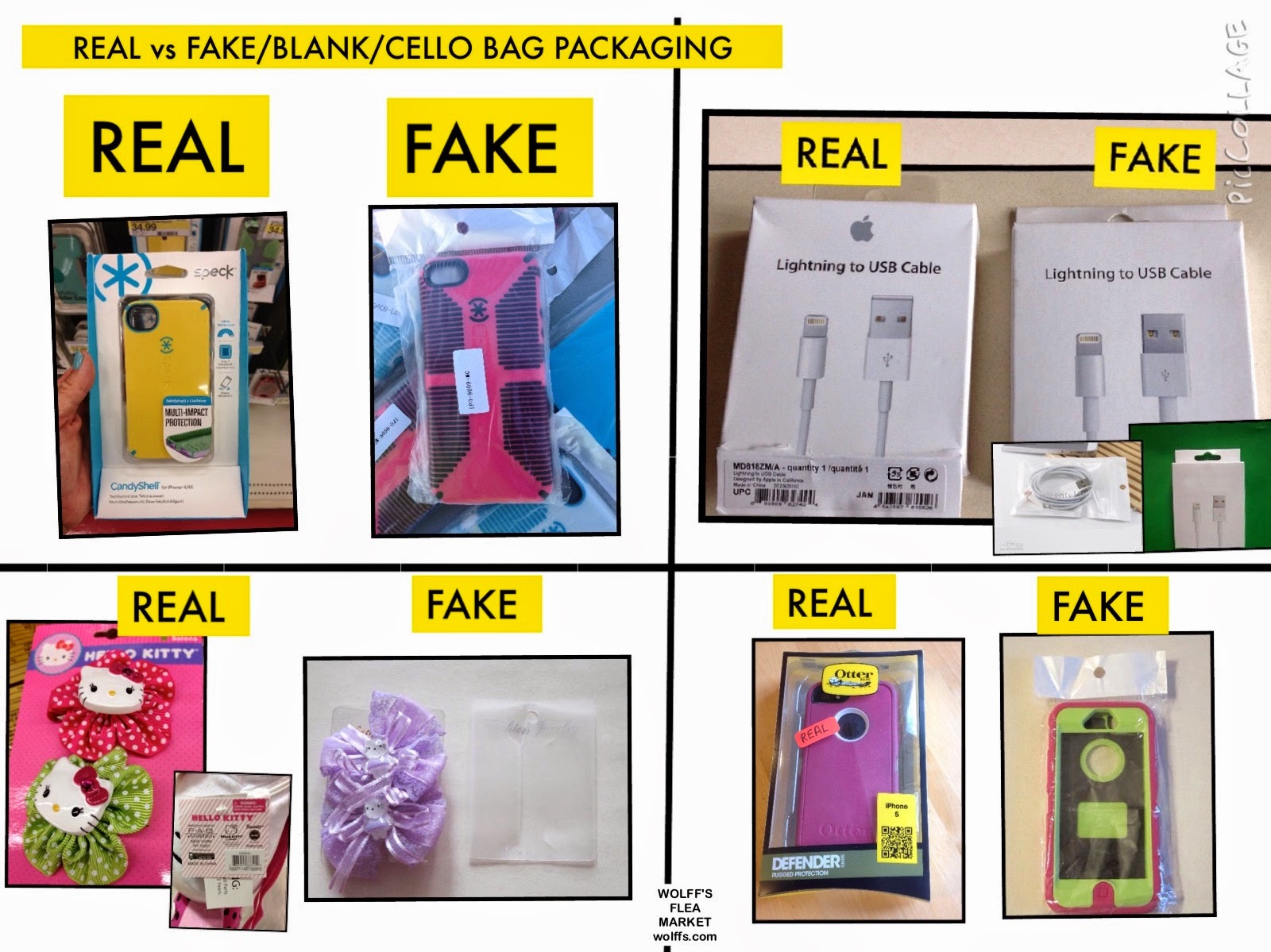 Posted by Wolff's Flea Market at 12:02 PM No comments:

PROPER LABELS: WHY WE LOOK INSIDE

Why do we stroll by your booth, grab a few items, turn them inside out, nod and walk away?

We are inspecting certain name-brand and licensed merchandise to make sure it is legit. While we are not trademark attorneys, we study authentic products with proper labels and tags.  We can often (but not always-that would make our job too easy) discern legitimacy by merely looking at sewn labels.

Brands identify their products with their names, logos and other details on well-sewn or applied tags.
They do not use generic sewn tags.
Period.

Posted by Wolff's Flea Market at 11:26 AM No comments:

THERE'S A BUST FOR THAT (COUNTERFEIT) PART 2


WORLD INTELLECTUAL PROPERTY DAY: There's a Bust for That Counterfeit!

We share with you links to recent significant (in our own minds) busts that have assisted us in forming cementing our opinions and policy.  Remember ongoing research regarding counterfeits remains a crucial tool. Arrests do not necessarily mean that a person has been found guilty. Please read further on subjects listed below in order to obtain the most up to date information. We will add more links as we find them. How can you find out more? We recommend that you subscribe to Google Alerts for a variety of counterfeit and brand name related key words.

PERFUME BUST AT THE BORDER:
http://www.wcax.com/story/28600528/430k-in-counterfeit-perfume-seized-at-northern-ny-border

FLEA MARKET TO CLOSE AFTER LINKS TO COUNTERFEITS:
http://www.stltoday.com/news/local/crime-and-courts/pagedale-flea-market-linked-to-counterfeit-goods-will-close-next/article_054d6aec-e9f6-5f5f-af94-58ae20a28617.html

OTHER: Article, "The Top 8 Biggest Counterfeit Busts and Seizures"
https://blog.stigmasearch.com/the-top-5-biggest-counterfeit-busts/

*All of these brand and many more are on our "Brand Watch List".

Posted by Wolff's Flea Market at 4:49 PM No comments: 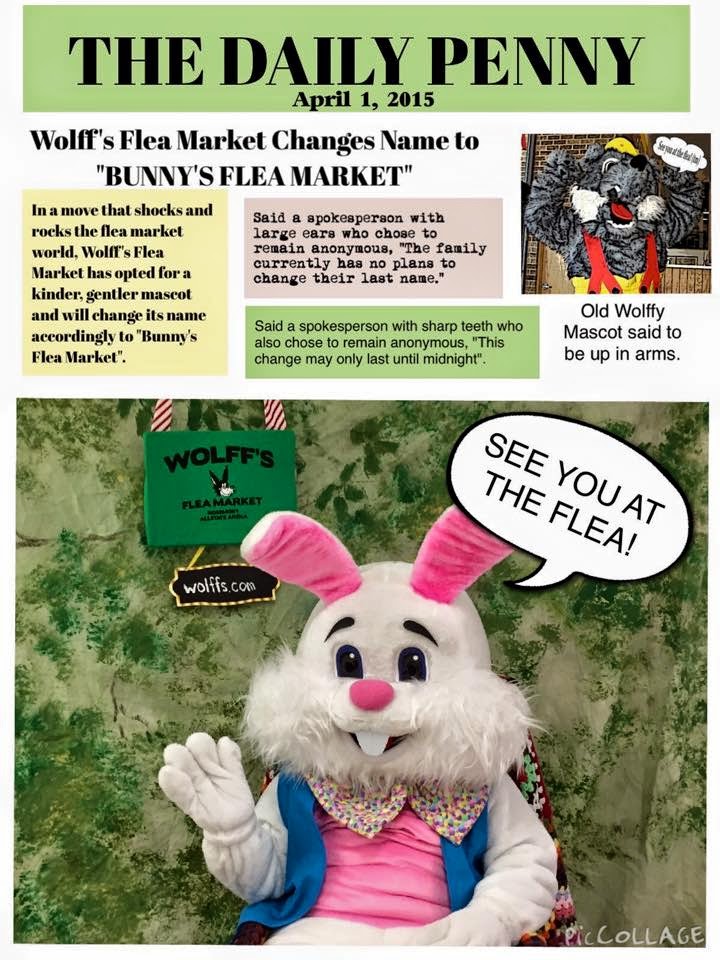 Posted by Wolff's Flea Market at 10:27 AM No comments: