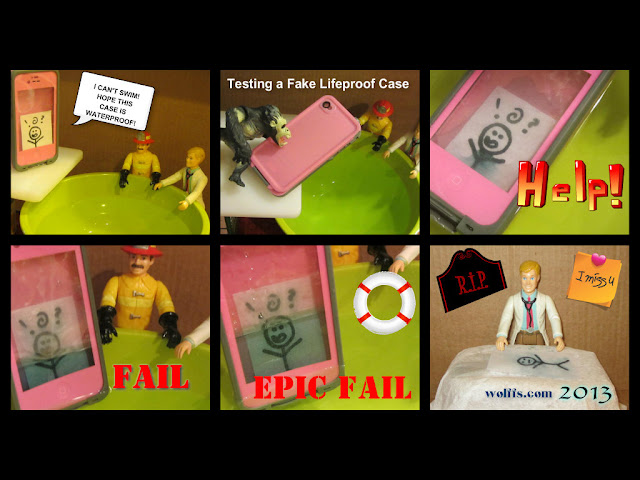 On Monday, July 8, 2013 at 9:24am CST, Stickman Jones was drawn, placed inside a suspected counterfeit LifeProof iPhone case and pushed off a cutting board platform into approximately 3" of lukewarm water.

All signs pointed to the fact that Mr. Jones did not know how to swim. First of all, he was made of paper and drawn with water soluble marker.

Plus, according to witnesses, just before the push-off, Jones was heard saying, "I can't swim! Hope this case is waterproof!" This statement was either ignored or misunderstood by Lab Gorilla Charlie, who proceeded to push Stickman off the platform. Charlie's only comment after the tragedy was a tearful grunt.

Furthermore, some witnesses claim that an unidentified human hand seemed to have "appeared from nowhere" and forcefully submerged the case  for several seconds. This fact has not been verified, as no photographic evidence exists. As the case chamber filled with water, Stickman's pleas for help apparently went unheard as Firemen Tom and Dr. Jerry stood cluelessly by. Witnesses say that Tom and Jerry "took no action and looked almost statue-like" during the whole ordeal.

Perhaps the outcome for poor Stickman would have been better had he been given the option of a backup oxygen tank. We know he would still be with us today had he been placed in an authentic waterproof LifeProof case.

Attempts to revive Stickman were of no help. He was soaked and had already begun to dissolve by the time he was removed from the case only 1 minute later.

We'll miss you Stickman.  You were a good, brave, doodle. You sacrificed your short life, just to prove that counterfeits are not only inferior, but dangerous.

Counterfeits deceive consumers and contribute to billions of dollars in lost revenue for legitimate companies. Authentic LifeProof cases are high quality, sturdy and "water proof, dirt proof, snow proof and shock proof". This evil counterfeit case indicated poor workmanship, a shoddy seal, and misspellings on the package. It took the life of our dearly departed Stickman. Needless to say, it will not protect your expensive smartphone.

Because of the danger that counterfeits pose to friends like Stickman Jones and to your trusty iPhone, LifeProof cases are now banned at Wolff's Flea Markets.

Images and brand names used for the purposes of discussion and education. Trademarks belong to LifeProof. Wolff's Flea Market prohibits the sale of counterfeit products in all categories. Research is ongoing.

For most updated rules and restrictions, please visit wolffs.com.